The RPA Major is the answer to many customer calls, demanding the hard, agressive Ritchie Blackmore stage sound of the 70's, without the need to get their amp heavily modified. The RPA Major offers a lot more gain compared to the stock RPA model with tons of crunch and a higher level of agressivity ... something that fits the modern Metal scene as well. With the level control turned up to the max, the RPA Major delivers an output level of 8 volts (!!!), which can kill most modulation stompboxes with electronical CMOS switching like delay, chorus etc. that are connected after the RPA Major in the signal chain. So please only use the RPA Major with full level directly into your tube amp. If you want to connect some stompboxes after the RPA Major, reduce the level to 50% to be on the safe side.

In 1974, right before the start of the „Burn“ tour, Ritchie Blackmore changed his live setup. First and foremost, he wanted to play live with an echo effect and made the AIWA TP-1011 reel-to-reel tape recorder his first choice. This unit offered the typical 2/3 seconds echo repeat, perfectly matching Blackmores natural beat. Additionally, Ritchie Blackmore used the integrated microphone pre-amp as a booster, and with this his beloved Hornby-Skewes treblebooster he used for many years was not longer needed and was sent into retirement. The necessary trebleboost function (from a technical point of view a „highpass“ function), was built into his heavily modified Marshall Major 200 amp.

The Major amp now received a cascaded pre-amp stage with a new, non-bridged cathode resistor at one of the triode stages to prevent too much overall gain. At the final stage, Blackmore‘s Major amp was loaded with four pre-amp tubes (incl. the driver tube), instead of the factory stock three tubes. Further on, the 250Ohm screen-grid resistors of the four KT88 power tubes were changed to 1kOhm and the two 10uF electrolytic filter capacitors of the BIAS power supply were replaced by two 47uF (160volt minimum) caps. Blackmore‘s tech did several fine tunings over the years to Ritchie‘s Major amp, because Ritchie experimented with several pickups in his guitars as well as with several new ideas of his trademark sound.

Not everybody owns such a heavily hot-rodded amp, and if so, for sure it will not have the correct highpass cutoff frequency ! So BSM had the idea, to not only rebuild the AIWA preamp stage, but to also integrate the important highpass function with the original cutoff frequency. The BSM RPA Major emulates both typical soundshaping functions in only one stompbox - another BSM first !

The RPA Major is equipped with a gain control, to dial in the best possible balance for the use with different amps and pickups. The EQ control allows a tonal fine tuning for the use of the RPA Major with different pickups, amps and speakers for an optimum in versatility. Depending on the pickups, the sweet spot of the EQ control is located between 11:00 and 01:00 o' clock.

As a soulmate for the RPA Major, you can use any mild sounding amp with a good master control function. Plug it in front of the CLEAN or CRUNCH channel, but don't use the high-gain or distortion channel ! Because of the EQ control, you can use all kinds of pickups, from the brilliant sounding low-gain Fender Custom Shop 69' (aka „Abigail Ybarra“ pickups) up to the thundering Schecter „F500“.

The RPA Major Special Booster is inserted between guitar and amplifier, not into the FX loop. The magical tone is achieved by the interaction between guitar pickup, booster and amplifier. The unit is powered by a 9V battery with a current consumption of approx. 350 uA. The average output level is 12dBm, the maximum output voltage when the strings are struck really hard is 8V max. Because of the external DC jack, you can power the RPA Major with 9volts.

Note: The negative pole of the battery is ground ! 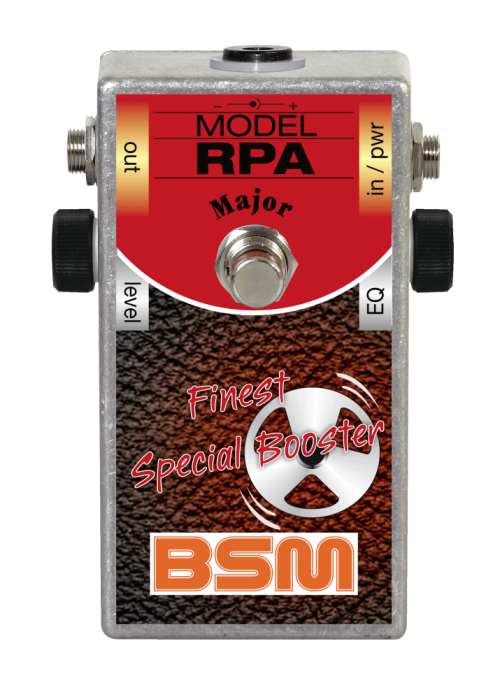 Here is a soundclip, recorded by Jon Hepworth

Another two soundclips from our friend Joe Stump

Check out product reviews
at Harmony Central Download this booster's
information sheet
If you have any questions concerning our products, especially the BSM RPA Major Special Booster, our tech-head and mastermind Mr. Bernd C. Meiser would be happy to talk to you. So don't hestitate any longer and send him an email to info@treblebooster.net or use the contact form to contact him.

Just played 2 gigs this weekend and used the RPA Major live for the first time. Was the best sound I have ever had live. Realy warm but still cut through the mix realy well. One of these gigs as a Biker rally with 1000 people with a large PA. I was using my Marshall JVM on the one of the almost clean chanels - a tiny bit of crunch. With the RPA on this channel it sounded massive. Check out my version of "Highway Star". It was done with the version of the original tracks on separate channels that appeared on the Internet. Have replaced the guitar part. recorded in a hurry. Just a bit of fun. Using the California btw. Thanks for my great tone! Cheers, Jon
Jon Hepworth