As a follow-up of the short-lived germanium-transistor loaded early issued Hornby-Skewes Treble Booster, now the 1967 version, equipped with a silicon transistor, appears on the scene under the BSM brand HS-S. With additional volume control like Blackmore´s modified unit as HS-S Master available.

The Hornby-Skewes Treble Booster was Ritchies favorite box for live and studio recordings like the famous 1971 "Machine Head" or the later 1974 "Burn" session. The HS-S Master in front of a Vox AC30 gives you the unique sound of the well-known rock hymn "Smoke on the water". Compared to its forerunner, the HS-S sounds a tad more aggressive with more mid-range with the guitar’s volume pot fully opened, a little bit similar to a WahWah sound. But the higher the pre-amp volume of the amp is dialed in, the more this midrangy tone will be forced into the background because now the saturation of the amp will generate the necessary harmonics. So it´s up to you to chase the sweet spot of the HS-S unit. You will have to raise the pre-amp volume of a Marshall Major noticeably because this amp is a very clean sounding one. To have some good reserves when dialing in the pre-amp volume Blackmore had his Major amps modded early with a cascaded pre-amp design right from the factory.

Almost all British rock guitarists using single coil pickup guitars, used a germanium or silicon Treble Booster from the late 60’s to the mid 70’s. By the end of the seventies, the Treble Booster was replaced by a new circuit from Japan, the so-called Tube Screamer and other similar overdrive circuits. These were acoustically based on the old Treble Boosters and therefore had a very similar frequency response. The treble boosters on the other hand, sadly fell into oblivion despite their unique and inimitable sound.
The HS-S Treble Booster has been designed for single coil or humbucking pickups with a relatively low/medium coil inductance, such as pickups in Fender or Gibson guitars. In conjunction with this pickups, the HS-S with the volume control of the guitar turned up to the max, produces a fat, biting and penetrating lead sound, minus any shrill characteristics. By lowering the guitar’s volume control, many shades of crunch can be easily dialed in. Another thing to consider is that when a guitar amp’s volume is turned up and reaching saturation, the power amp normally begins to mute the highs, which results in a duller sound. At an amp’s full tilt, the HS-S Treble Booster allows a more transparent tone, covering the entire frequency range to shine through. With vintage amps like the Fender Deluxe, Fender Bassman, Vox AC30, Marshall 100w or Marshall Major it is amazing what effect the use of a good treble booster has.

The HS-S Treble Booster is inserted between guitar and amplifier, not into the FX loop. The magical tone is achieved by the interaction between the guitar pickup, Treble Booster and amplifier. The unit is powered by a 9V battery with a current consumption of approx. 750 uA with positive ground. The average output level is 5dBm, the maximum output voltage when the strings are struck really hard is 4V max. 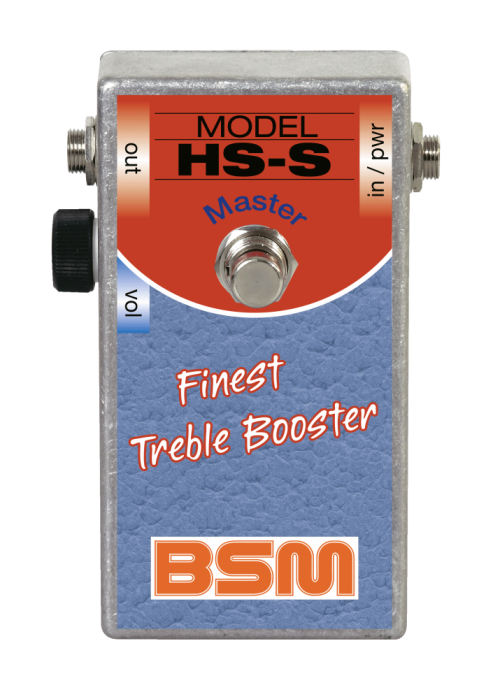 Here is a great soundclip from Leon, to get a good impression of the HS-S Masters´s tone

Here is a great soundclip, to get a good impression of the HS-S's tone

Check out product reviews
at Harmony Central Download this booster's
information sheet
If you have any questions concerning our products, especially the BSM HS-S Master Treble Booster, our tech-head and mastermind Mr. Bernd C. Meiser would be happy to talk to you. So don't hestitate any longer and send him an email to info@treblebooster.net or use the contact form to contact him.