In November 1973, right before the start of the "Burn" tour, Ritchie Blackmore changed his live setup. First and foremost, he wanted to play live with an echo effect and made the AIWA TP-1011 reel-to-reel tape recorder his first choice. This unit offered the typical 1/3 seconds echo repeat, perfectly matching Blackmore's natural beat. Additionally, Blackmore used the integrated microphone pre-amp as a booster, and so his beloved Hornby-Skewes trebleboosters, he used for many years, were no longer needed and sent into retirement. The necessary trebleboost function (from a technical point of view a "highpass" function), was built into his heavily modified Marshall Major amp.

This first remarkable modification of the Major's pre-amp stage was done in the Marshall factory, resulting in a raw and fat tone, you can hear on the "California Jam" recordings from April 1974. Later on, a new mod was done, resulting in a biting, piercing treble with a tight bass, the "Live in London" tone as well as for the rest of the Deep Purple Mk3 period. The Major amp received a cascaded pre-amp stage with a new, non-bridged cathode resistor at one of the triode stages to avoid too much overall gain. Further on, the 250Ohm screen-grid resistors of the four KT88 power tubes were changed to 1kOhm, and the two 10uF electrolytic filter capacitors of the BIAS power supply were replaced by two 47uF (160volt minimum) caps.

Only a few people own such a heavily hot-rodded amp, and if so, for sure it will not have the correct highpass cutoff frequency! So BSM had the idea, not to only emulate the AIWA preamp stage, but to also integrate the important highpass function with the original cutoff frequency. The BSM RPA California II emulates both typical sound-shaping functions in only one stompbox!

The volume pot now lets you dial in the overall loudness of the booster and therefore how hard the first tube will be hit. The "presence" control lets you fine tune the amount of saturation and dirt.

The best results for Ritchie’s Mk3 tone can be achieved by using Fenders Custom shop ’69 pickups.

Marshall, Marshall Major, AIWA, Fender and Strat are registered trademarks, which BSM is not affiliated with!

Note: The negative pole of the battery is ground! 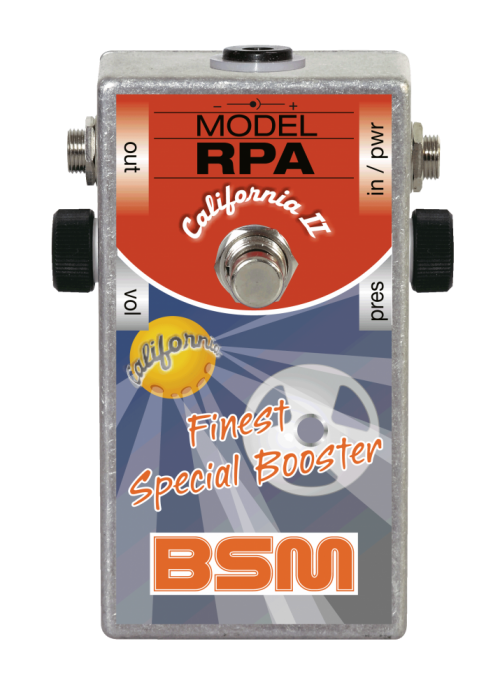 Download this booster's
information sheet
If you have any questions concerning our products, especially the BSM RPA California II Special Booster, our tech-head and mastermind Mr. Bernd C. Meiser would be happy to talk to you. So don't hestitate any longer and send him an email to info@treblebooster.net or use the contact form to contact him.